The direction my genealogy research is taking me in lately is one of “tracing it forward”, now that I’ve pretty solidly established the branches leading back.

For the Foutz side, for instance, I know when our first ancestor, Michael Pfouts, came to America. And when he settled in Harrison County, Ohio. And from whom I’m descended. For those of you scoring at home — or even if you’re alone — that’s: Michael Pfouts — Gideon Pfouts — Jonathan Foutz — Vance Foutz — Don Foutz — Fred Foutz — me.

The payoff is making a connection with some living, distant relatives who can shed some light on ancestors like Gideon, and Jonathan, and etc. and share treasured family photos, documents and other relics that illustrate, for those of us with no access to relatives with memories of these ancestors, just who these people were, and how they lived.

For example, the photo above came through a connection established with descendants of my great-grandfather Vance’s sister, Ida. It was shared at the Moreland (Ida’s married name) family reunion this summer in New Philadelphia. We believe this portrait is of my great-great grandfather, Jonathan Foutz, since it was labeled “Granddad Foutz” on the back, and was among several photos identifying his wife, Rebecca, as “Grandma Foutz” and Rebecca’s mother, Rachel Caldwell, as great-grandmother.

For now, then, what we have is a pretty detailed sketch — of places, of people, of lives lived — intershot with questions and mysteries. Over the next couple weeks I’ll share what I’ve found out about the family of my great-grandfather, Vance Cleveland Foutz — and the compelling questions I’m still working to answer.

Born to the Foutz (Pfouts) Farm Near Bowerston

Jonathan first turns up at five years old in the 1850 census as the oldest child of Gideon Pfouts and Delilah (Jones) Pfouts. They are just getting settled on their own farm in Monroe Twp. in Harrison County, Ohio.

Gideon, 29, is the youngest son of family patriarch, Michael. His new farm is literally surrounded by the acreage owned by his brothers and sisters. His father is retired — and to die in 1851 — and lives in a nearby household in North Twp. Delilah, 24, and Gideon married in January 1843. Jonathan was born in May 1845, and oldest daughter Tabitha in April 1848.

Family legend has it — verified in a 1910 history book — that Rebecca Jane Caldwell was also born on the Gideon Pfouts homestead, same as Jonathan. If that’s true, then sometime before the 1850 census, when she is still a baby, her parents, Robert and Rachel Caldwell, move northwest to Sherrodsville, in Carroll County. She manages to stay connected with Jonathan and the Pfoutses, though, and they marry Oct. 11, 1865 in Harrison County.

Their oldest son, Sherman S. Foutz, is born in September 1867. Lila Ann follows in July 1869. In the next year, Jonathan, Rebecca and family take up the farming trade in the service of Gideon’s siblings. The 1870 census — and an 1875 Monroe Twp. map — shows them occupying the parcel owned by Jonathan’s aunt Elizabeth and uncle Jonathan, a brother and sister who would live and farm together (with no record of spouses for either) their whole lives, until their deaths sometime after 1880.

On a neighboring parcel is Gideon’s brother — and another uncle to Jonathan — John Pfouts, his wife Margaret (some 20 years his junior, and from Ireland), and their three kids, Andrew, Nancy and Oliver. These aunts, uncles and cousins to Sherman, Lila and the rest of Jonathan’s and Rebecca’s brood would farm this parcel through the rest of the 1800s. 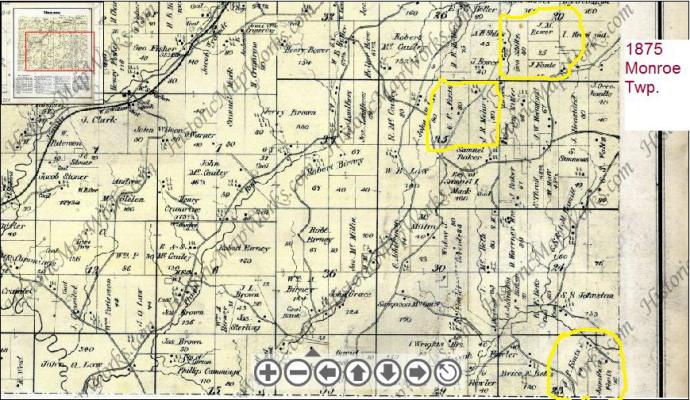 A busy nursery guaranteed plenty of future farmhands, when — and if — they grew up. But many of Jonathan and Rebecca’s seven children would find life off the farm. Their family, by 1890, comprised:

and my great-grandfather Vance, born 1887

The gaps between Ida and John and John and Charles could indicate a stillbirth, or a child who died young, which was also common in those days. But the loss of much of the 1890 federal census in a fire prevents us from filling in the blanks.

Lila marries Sam Hatheway in 1889 and resides in nearby Dennison the rest of her life.

In 1891, Rachel marries William Coleman, a man nearly 25 years her senior, and by 1900 resides in Pennsylvania.

Ida marries Thomas Coleman in 1889 (at just 16), and raises a large family with him in nearby Carrollton.

John works as a clerk, residing in Bowerston.

And as for Jonathan and Rebecca, the 1900 census finds them residing in Washington D.C. with son Sherman, daughter-in-law Elizabeth, two grandchildren, and their own young sons Charles, 15, and Vance, 13.

As previous blog profiles of Sherman have shown, he made a name for himself in the insurance business and secured an appointment to the U.S. Treasury Department during the Grover Cleveland administration. Whether or not Jonathan, Rebecca and family accompanied their oldest son as a matter of choice, or opportunity, or of necessity is not known. What is revealed, in a 1910 biographical sketch of Sherman for a History of Berks County, Pa., is that Jonathan dies young in September 1900, at just 55.

That is where Jonathan’s part of this saga ends. But questions remain: How did he die? Was he sick beforehand, and is that why the family resided in Washington D.C. with his eldest son? Where did Jonathan die — in Harrison County, or in D.C.? Was there farm property to dispose of back home, or had it been sold (or lost?) prior to the 1900 census? Where did Rebecca and her sons go in the years between his death and the 1910 Census, which finds Charles in New Philadelphia, and Rebecca living with her youngest son, Vance, in Dover? Where is Jonathan’s final resting place? If it’s Conotton Cemetery, in Bowerston, Ohio, the marker may be damaged or missing in 2010.

The next post in this newsletter series will detail the life of Colt’s great-great grandmother, Rebecca Caldwell Foutz. Subsequent posts over the next few weeks will explore the families of each of her children in turn — the details we know, and the mysteries that remain.