How the Foutzes Came to Dover, Ohio | Foutz Family History 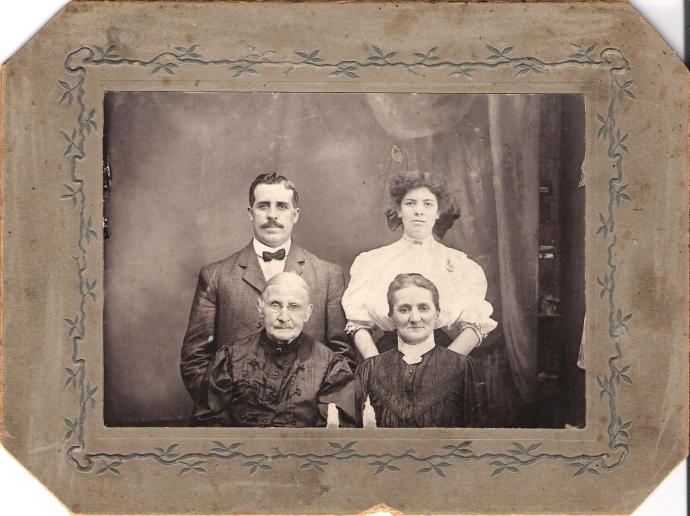 Yesterday, I shared an excerpt from the journal of Sherman Earl Moreland, a first cousin twice removed. More clearly, he’s the third child of my great-grandfather Vance Foutz’s sister, Ida, and his written remembrance of his 99 years has proven a vital key to understanding what befell our ancestors 100 and more years ago.

For starters, Sherman’s memoirs — faithfully transcribed by great-granddaughter Dawn James — have answered the riddle of how my great-great (and Dawn’s great-great-great) grandfather, Jonathan Foutz, died.

Public documents failed to disclose the why and what-after of Jonathan and wife Rebecca’s late 1800s move from Harrison County, Ohio — where two previous generations of Foutzes had settled into farming life following patriarch Michael Pfouts’s emigration from Wuerttemburg, Germany — to Washington D.C.

Jonathan’s death in September 1900, as reported in a biographical sketch of eldest son, Sherman Foutz — led in-the-dark descendants to wonder: was he already ill when he moved wife Rebecca and youngest sons Charles and Vance into Sherman’s budding household? Had the farm been lost, due to poor health or financial straits? Was his illness chronic or sudden?

Sherman Moreland’s journal at least gives the impression the move was voluntary, a product of uncle Sherman Foutz’s fruitful appointment to a U.S. Treasury Post. Uncles John, Charles and Vance had been secured jobs by their big brother, and later in the 1890s  the family returned home to the farm south of Bowerston, Ohio, so the place was apparently secure. Enough so that Sherman Moreland remembers Jonathan continuing to work it, with his young grandson trailing behind, knife in hand, ready to help wherever he might be directed.

So, it’s likely that Jonathan’s illness was sudden Much in the way second son John succumbed to tuberculosis at age 21 in 1899. Just a year and a half later, Jonathan would fall ill with Bright’s Disease — a classification doctors of the day gave to kidney inflammation. He was dead, at 55, in September 1900.

But what became of the family next? How did they come to land in Dover, Ohio in 1910 — where my grandfather, Donald Dale Foutz, and my father, Frederick Charles Foutz were born (not to mention several generations on my mother’s side), and I was raised and graduated high school? How could two youngest sons — Charles at 15, and Vance at 13 — hope to support their widowed mother?

A Wandering Life — with Family Reconvening

The path of the Foutzes from 1900 through 1910, when the federal census records my great-great grandmother Rebecca in the household of youngest son (my great-grandfather) Vance, is rendered, in part, by the pen of Sherman Earl Moreland, then growing from a 7-year-old into a late teenage factory laborer alongside his father, Thomas.

In his first 17 years, Sherman’s family has moved from south of Bowerston, where he was born in the log cabin of Grandpaw Jonathan and grandfather Thomas Sr. served as four-time mayor; to railroad town Dennison, where Ida acquires a lot in town for the then-relatively-princely sum of $1,000 (maybe due to an inheritance after Thomas Sr.’s death; but why was the lot acquired in her name?); to a farming life outside Carrollton.

The family’s journey takes them through the corners of three Ohio counties — Harrison, Tuscarawas and Carroll — but it is to other points that Sherman’s heart returns in his memoirs, as he takes up the winding course of his extended family following the death of grandfather Jonathan (paragraph breaks are my own):

Grandmaw, Charlie, and Vance then moved to her father’s old home about three miles from Sherrodsville (Robert Caldwell had died in 1890, but mother Rachel would live to 1918, dying at 91 — Colt).  The old Caldwell farm.

Charley and Vance although quite young secured jobs at the coal shafts.  To help support their widowed mother.  Sherrodsville at that time was quite a boom town.  Wild and rough, seventeen saloons.

They later moved to Phillipsburg, a company owned mining town.  On the banks of the big McGuire Creek.  East of Sherrodsville. (In the 1930s, the Muskingum Watershed Conservancy District would dam the creek, forming Leesville Lake and swallowing the site of the old town — Colt) Phillip Beamer’s wife was formerly a member of the Moreland clan.  Grandmaw Foutz lived there for some time.

Then they moved to Canal Dover.  Charley in the mean time married Rose Whilte.  Her folks also lived in Phillipsburgh.  The Whites were natives of West Virginia.  The whole White family also moved to Canal Dover.  The old man rigged up a wagon which he would park on street corners selling popcorn, candy, and what nots.

Uncle Bill and Aunt Rachel Coleman had moved from Levetsville (really, Leavittsville, another town closeby — Colt), to Phillipsburgh.  Uncle Bill, a stationary engineer, worked in one of the several large coal mines.  At that place.  Later the Colemans moved to Canal dover.

It was when these folks lived in Dover that we visited there.  I saw the first and only canal boat in my life on the canal.  The boat was pulled by a mule.  The mule travelled along a toe path beside the canal.  Uncle Bill was employed on the new river bridge that was under construction at that time.  We on that trip attended the first county fair in our lives.  The county fair at Dover.  Also about this time mother took us older children to Ringling Bro. Big Tent show at Urichsville.  We went by train.  And really had a wonderful time.

It’s a cheering thing to read of Sherman’s fond remembrance of this times, since the 1910s would turn dark for the Foutz clan.

In 1915 alone, first Rachel’s son Karl, and then Uncle Sherman Foutz would succumb to the ravages of tuberculosis. “Grandmaw” Rebecca would suffer a stroke and die in May, 1915.

Ida, in 1911, was struck with typhoid fever and suffered as a result of it for many year after, likely succumbing in 1917 from complications due to the flu, as that epidemic began to sweep the country.

In 1918, Charles, by then moved to neighboring New Philadelphia and father of four, would die of pneumonia at just 32. Rosa would remarry and move her clan to Canton.

By the 1920s, just Vance and sister Lila remained. Vance would outlive his sister (who passed away in 1936, at 66), by another 32 years. And the families grew distant, with branches in my father’s and my own generation enough removed to be ignorant entirely of our farming roots in Harrison County, and our German patriarch, Michael.

But Vance was perhaps not so distant as his new life, working the steel mills in then-booming Dover, might suggest. His 1968 funeral registry, kept these many years, first by my grandfather, Don, then by his widow, Erma, and now in the possession of my father, Fred, records the names of these stalwarts, from the old Pfouts/Foutz circle, as in attendance that September day, and signing:

Mr. and Mrs. Roy V. Moreland (another child of Ida)

Stay tuned for more from Sherman E. and that precocious great-granddaughter of his — and about the turn-of-the-century Foutzes.